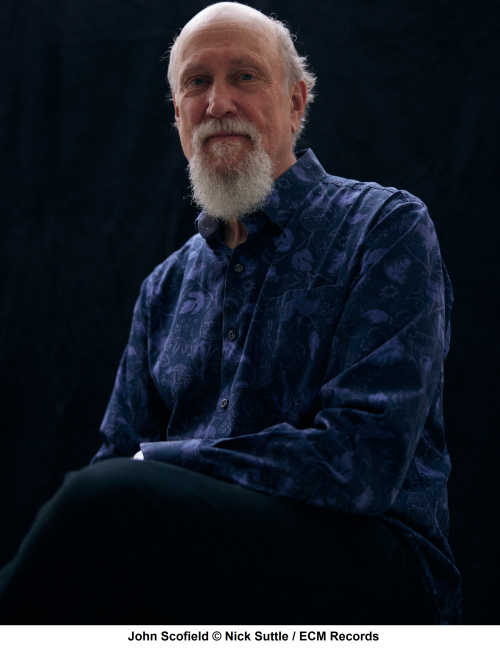 John Scofield has one of the most distinct and fascinating guitar sounds in jazz. Notes are picked and bent, creating a pizzicato-like, jagged sound in places and swings and rings in others. John is a regular reader of this blog, just as I am an avid John Scofield fan and listener. 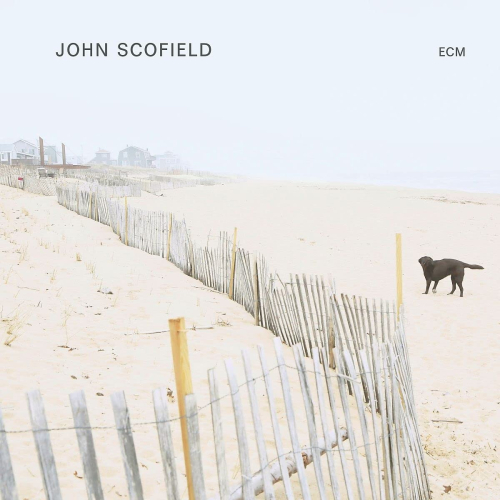 Dating back to 1977, John has recorded more than 40 albums as a leader and is a three-time Grammy winner. His new album, John Scofield (ECM), is John’s first-ever solo album and features him playing by himself or accompanying himself on an overdub. The music is superb, exciting and commanding, and it’s a joy to hear John isolated extent, which lets you experience the full of his art.

Recently, I caught up with John for an email interview:

JazzWax: John, where did you grow up and how did you come to music?
John Scofield: I grew up in Wilton, Ct., about an hour from New York City. I became interested in music at age 11, after being inspired by pop music of the day and receiving a guitar from my parents. After the Beatles hit, music became everything to me. 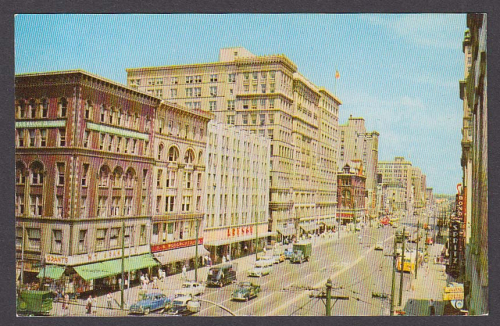 JW: You’re originally from Dayton, Ohio. When did your family leave for Connecticut?
JS: We left Ohio when I was 5. My parents weren’t musical at all but were fully supportive of my interest in music. It was the main area where I excelled, and they trusted my enthusiasm. [Post card above of Dayton, Ohio, in the 1950s]

JW: Were you introverted as a kid?
JS: I guess so. I had friends, but I felt a little like an outsider. 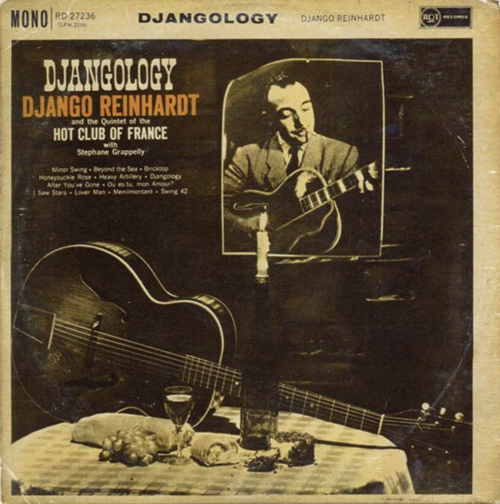 JW: What was the first jazz album that influenced you?
JS: My dad wasn’t a jazz fan but he had read about Django Reinhardt in The New York Times. When I was 12, he bought me Djanology. That was my introduction to the jazz guitar. I started taking lessons from a local jazz guitarist. When I was 15, I started buying jazz records by guitarists Wes Montgomery and Jim Hall but also Charlie Parker, Miles Davis, John Coltrane and Bill Evans.

JW: What did the guitar do for you, socially?
JS: As you know, rock ‘n’ roll ruled in the early ’60s, I wasn’t good at sports so when I started playing guitar in school, I got some recognition for it. That put the hook in me. But mainly I loved music. I wanted to drop the guitar and play drums after a few months, but my thrifty parents insisted I stick to the guitar they had invested in already.

JW: Were you in the high school band?
JS: Not in an official school band, but I was in one with some of the teachers from school. I started playing in a kid band when I was 12 and we played dances and parties and stuff until I was 15 or so. We played top 40 hits and tried to specialize in soul music. Funny, my three Grammy awards are downstairs in boxes but I have my tiny first “Battle of the Bands” trophy in my dining room.

JW: Did you play in a band outside of high school?
JS: I started to play with older kids when I was 16. We played bars on the weekend some. Then was my introduction to the professional music world. I had a fake ID that said I was 18. I started gigging on most weekends by then. Again, lots of stuff in the rock and blues realm. 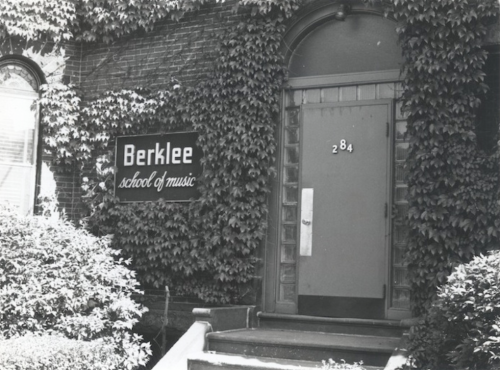 JW: At Boston’s Berklee School of Music, was college a revelation or had you already formed your feel?
JS: I didn’t really know any kids who were into jazz when I was in high school. I had one friend who was into jazz and we explored records together and went to the Village Vanguard in the city and stuff. But neither of us could play much. It wasn’t until I went to Berklee that I met people who could actually play jazz.

JW: Who was most influential at Berklee and why?
JS: I met some kids my age who already sounded great—[saxophonists] Joe Lovano, [multi-instrumentalist] Billy Drewes, [bassist] Abraham Laboriel Sr. and [guitarist] Pat Metheny. Also, [vibraphonist] Gary Burton came to teach there and so did [bassist] Steve Swallow. [Drummers] Alan Dawson and Joe Hunt were on the faculty, and there was great jazz all around us by people who could really play. I got to play with them some, and I went weekly to hear live music at the Jazz Workshop. 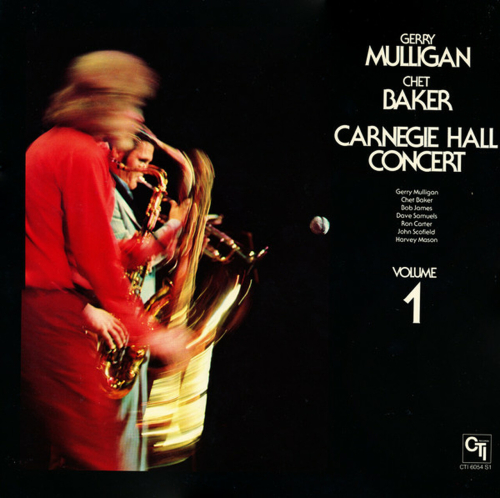 JW: When did you leave to play with Chet Baker and Gerry Mulligan?
JS: After 2 1/2 years at Berklee, I dropped out because I really wanted to practice all the time. I also was working a lot in Boston and was able to support myself with money earned from playing gigs. Alan Dawson recommended me to Gerry Mulligan when Gerry came to play at the Jazz Workshop [in 1973]. He wanted to augment his regular quartet with guitar and vibes. The recording with Chet and Gerry—Carnegie Hall Concert—came right after that, in 1974. [The band included Gerry (bar), Dave Samuels (vib,perc), Bob James (p,el-p), John Scofield (g), Ron Carter (b) and Harvey Mason (d).]

JW: How would you describe your sound on guitar?
JS: I can’t because I actually don’t know how to go about doing that. I think we all have original sounds and we just have to let it develop. I’ve always tried to play mainstream jazz, but I started with blues and rock and have never completely moved away from that. I used to go hear BB King and Otis Rush and the blues guys in the 1960s who really affected me. I shifted into jazz after that, but I never lost the blues thing. I’ve never used the orthodox arch-top jazz guitar set up. Instead, I played a semi-acoustic like the blues guys. Although I use heavier strings, they are light enough to bend. It’s different than the standard jazz guitar set up. 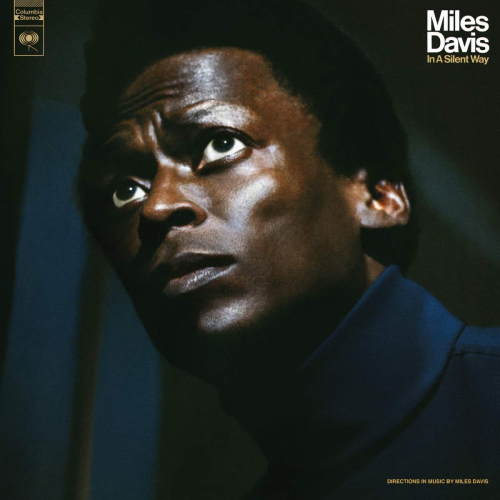 JW: What was it about fusion that was so appealing at the time?
JS: When I first started getting into jazz, Miles Davis’s In a Silent Way had just been released [in July 1969]. [Guitarists] Larry Coryell and John McLaughlin were popular, and the music of the Gary Burton Quartet starting in 1967 was a special kind of fusion. Some of the early fusion still holds up. Listening to Bitches Brew today, it’s a really progressive sound. These groups, along with Herbie Hancock’s Head Hunters and Weather Report, were the groups I loved most. There was so much work for guitar players in the ’70s with the fusion boom that I ended up playing a lot of that music.

JW: Who pulled you into the fusion scene?
JS: [Drummer] Billy Cobham really discovered me in 1975, right after I had recorded with Gerry and Chet. [Guitarist] John Abercrombie had just left Billy’s band, and I went on the road with Billy and his groups for two years. First there was his three-horn band, then the Bill Cobham/George Duke band. I toured nonstop with them, and it was a fantastic experience. We played opposite Weather Report, Shakti, Larry Coryell, Herbie Hancock and even the Average White Band. I got to know so many people on the fusion scene then, and that experience set me up for what came next.

JW: What about straight-ahead jazz?
JS: What’s funny is that I really wanted to play mainstream jazz but the fusion world was so exciting at the time that I couldn’t see giving that up to be in New York to try to get in with the beboppers. I remember being on the road with Cobham and listening to bop in my headphones all the time.

JW: Which artists influenced you most coming up?
JS: When I was a kid, I was listening to all the famous rock groups of the ’60’s, just learning their songs to play in our band. Then came the blues guitar players such as BB King and all of his disciples, plus Eric Clapton, Jimi Hendrix and Jeff Beck. I think I was kind of a snotty 15-year-old blues purist at the time. Then at 17 I traded that in to become a jazz snob. Country was something I always appreciated, but more for the songs and singers like George Jones than the guitar players.

JW: Tell me about the thinking behind your new album.
JS: I don’t think I would have made a solo album if it hadn’t been for the pandemic. I was forced to stay home for almost two years. I bought some equipment so I could record my electric guitar, and I used my looper pedal to accompany myself. The looper is an electronic device that creates instant recordings of me playing and plays those recordings back in real-time so I can overdub on top of my own playing. When playing straight solo guitar, I always found it hard to get a groove going. But with the looper, I can play tunes and have accompaniment like you can with a band. Because you’re at ease with your own rhythmic style, the conversation with yourself can work well. But I find it hard to be in love with my own playing.

JW: Why?
JS: I love other music and try not to judge my own playing, certainly not listen to it too much because then one becomes self-conscious, which isn’t good for improvising. 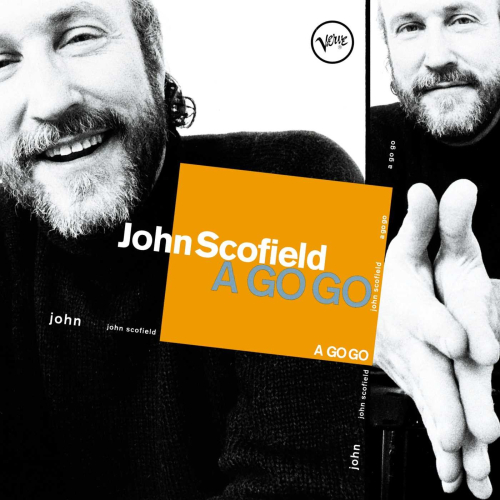 JW: If Martians came down from Mars (where else?) and wanted to know about John Scofield’s music, which five albums would you recommend as a gateway into your work?
JS: I never listen back to my old records so it’s hard to come up with five. I’ve actually made more than 40 records as a leader at this point. Tell the Martians to listen to Blue Matter (1986), A Go (1998), Uberjam (2002), EnRoute (2004) Quiet (1996). 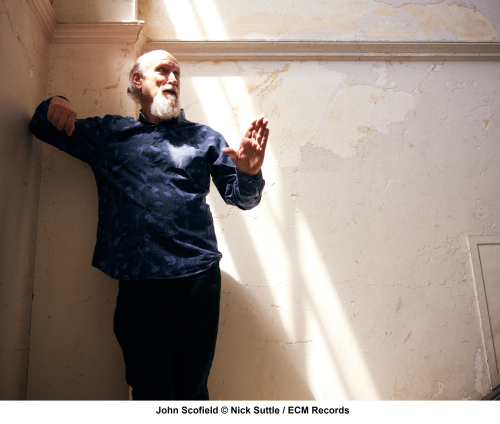 JW: When you’re not touring or recording, what’s your off-duty passion?
JS: I love being at home and spending time with my wife,our daughter and her husband and our grandchildren, walking, walking our dog, watching Netflix (lots of subtitled TV series from other countries) and reading books. I have a nice bunch of friends who are not musicians where I live. Seeing the seasons change in the northeast. During the pandemic I’ve become a homebody. It’s the longest I’ve been at home, in one place, since I was a kid because I’ve been on the road so much. I’ve got to say, while I really love staying home, I could not live without playing with a band and the interplay between musicians.

JazzWax clips: Here’s It Could Happen to You…

It Could Happen to You