Skip to content
We’re wrapping up our two-part special feature with two Wonder Women of the Bass, Jacqueline Pickett (last month’s feature) and now Susan Hagen. Susan discusses her backstory, her current projects, and her new book of warm-ups for double bassists. She has also graciously offered a sample warm-up exercise that readers can download and try on double bass. Susan is also involved in the League of Women Bass Players as a founding member and board member of the League. As of this writing, the upcoming League of Women Bass Players’ conference has been moved to January 2023. Head to LOW B for more info, registration info, and to discover what attendees can expect from the event. 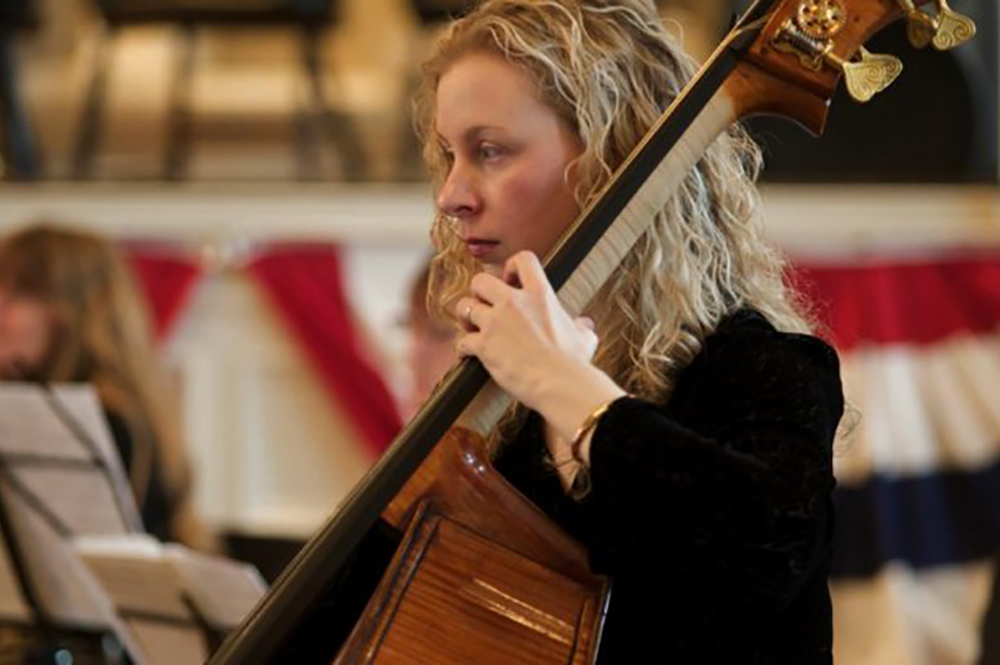 Susan recently became the principal double bassist of the Boston Pops Esplanade Orchestra, the first female ever to do so, and has been a featured soloist with them! Additionally, Susan performs with the Boston Ballet Orchestra, Boston Lyric Opera Orchestra, and many other groups throughout the Boston area.

Susan is on faculty at Berklee College of Music and is a frequent guest lecturer at Harvard University. She has been a clinician at the Rochester Bass Retreat, Boston University Tanglewood Institute, the International Online Bass Summit, Oberlin Conservatory, and Appalachian State, among others.

Susan often performs chamber music with Boston-based chamber music groups. Susan performed at the International Society of Bassists Convention in 2015 with world-renowned electric bassist Steve Bailey and continues to collaborate with him, and is featured on his latest album entitled “Carolina” and has also recorded pieces on Victor Wooten & Steve Bailey’s latest Bass Extremes album “S’low Down.”

She loves to perform & premiere new music; since March 2020, Susan has recorded more than 50 pieces (all written after 2010) and has given the World/US/Regional premiere of over 20 pieces in online recitals. In August 2018, Susan gave the US premiere of David Heyes’ “Seven Last Words from the Cross” in Rochester, NY, and has also commissioned and/or given premieres of double bass music composed by David Heyes, John Alexander, Humphrey Clucas, Símon García, Lloyd Goldstein, John Kennedy, Rodrigo Mata, Luis Guillermo Pérez, Mary Rae, Peter Byron Smith, P. Kellach Waddle, and Martin Wind, among others.

Since March 2020, Susan has given eight solo recitals and has teamed up with her father, guitarist/electric bassist Roy Hagen, arranging and performing music of many genres, ranging from French art songs to current pop tunes. All the money raised at these concerts has been donated to charities around the world.

She was invited to give a solo recital in honor of Teppo Hauta-aho and Frank Proto at the International Society of Bassists’ 2021 Virtual Convention and will appear again at the ISB’s 2022 mini-convention.

Susan recently published a book of Warm-Ups for double bassists called “BASSics of Bass” which can be purchased through her website or at DBB Publications.

Who were your influences?

As an adult, the list is so long, that I’m not sure where to begin! I’m inspired by my family. David Heyes is certainly one, as well as Victor Wooten & Steve Bailey. All three of these people I consider to be friends as well as colleagues. Many of the people I work with inspire me daily…as do my students. I’m also incredibly inspired by the younger generation of female bassists that I see emerging, as well as by athletes who “defy the odds” and the ones who openly talk about their own personal challenges; we are all human and can work together to support, inspire, and encourage each other.

What are you woodshedding right now?

On my iPad, you’ll find music for a recital program that I’ll be giving this summer and Símon García’s new concerto that I will be giving the US premiere of in November.

We usually hear about the downsides of being a female in the music industry. Let’s flip the script; do you see any benefits?

I feel like I have endurance, perseverance, thick skin, a natural ability for diplomacy, and the ability to be a nurturer. I know I am stronger than people expect (women are!). Some of these may be qualities I already had inherently, and some are qualities that have developed over time. But either way, I hope to pass these on to the next generation of female bassists.

How are you handling working through the pandemic? How has technology helped (or hindered) you? Any tips to share?

I amped up my technology use at home & re-opened my private studio virtually. I also recorded many pieces and performed eight solo recitals that I streamed online – and raised money for charity with the ticket sales from the concerts. And I wrote and published a book of Double Bass WarmUps!

I tried to take this time to continue playing a lot of music and reach & connect with as many people as I could. The upside: I have found wonderful people from all around the country and the world that I may never have met if not for the pandemic.

I also tried to take advantage of this slightly slower pace of life and enjoy some extra time with my family; they are an incredible group of human beings that add so much love and light to this world!

What are your current projects that you can tell us about?

The most exciting thing going on is The League of Women Bassplayers – we are having our inaugural conference online in January next year, where I am giving a recital, a WarmUp class, and am one of the Keynote Speakers. I just finished writing a book of warm-ups and am starting work on a second book. I also performed another recital on April 30. It is still streaming online until the end of May, and tickets are still available. Every penny is going to charity (Relief for Ukraine, Bass Players for Black Composers, and League of Women Bassplayers). I hope people will check it out – it was an incredibly fun program!! (More info on LOW B here.)

Dream artist or band to collaborate with?

I’ve collaborated with amazing artists from Gil Shaham to Bjork, many pop & country stars, Victor Wooten, Steve Bailey, and John Pattitucci. But the one group that I would LOVE to play with is the Norwegian band a-ha!!!

Important cause or issue that you support?

LOW B has a great spirit of supporting non-male bassists. I am also a big fan of Bass Players for Black Composers and am currently working on a collaboration with them.

What would you want to change about the music industry?

I feel like we are working on it right now… by helping and encouraging marginalized bassists to keep pushing forward. Together we can make the change!!!

New artist (or new to you) that we should all know about?

Mason Bynes is a fabulous singer who writes incredible music for the double bass. I performed one of her pieces in my most recent recital called The [WRECK}oning, and I am commissioning a piece from her that she’ll be working on in the fall.

An early experience that shaped you as an artist now?

My family is all musicians, and their love of music had a huge influence on me. And, of course, every person who said, “Girls shouldn’t (or can’t) play bass.” – they’ve all shaped me because I wanted to prove them wrong (who’s stubborn?!?!?).

You know bassists are all about the gear. And I’m definitely a gear nerd. So I have to ask…any recent game-changing acquisitions to your toolkit?

Because I play double bass, my focus would be more about new bows and rosin (Leatherwood Bespoke Rosin is my latest favorite).

What drew you to the music industry?

Music brings beauty to the world, and I had been bitten by the Bass Bug – I just HAD to do it!!!

It’s probably very similar to most people’s days. Most days I practice, teach, do some housework, cook, and spend time on the phone or in person with my family (they all live nearby). Life is good!!!

My favorite part is the actual music – the performing, the sounds… the BASS!

My least favorite part is when competition is unhealthy or when people are not supportive of one another.

Where can we find you on the interwebs?

Brittany Frompovich is a highly regarded educator, clinician, blogger, and bassist who currently resides in the Washington DC/NOVA region. For more content from Brittany, check out her blog, her YouTube channel, and her Bandcamp site. She also offers handmade unisex music-themed jewelry through her Etsy store. Get a Wonder Woman Tee!