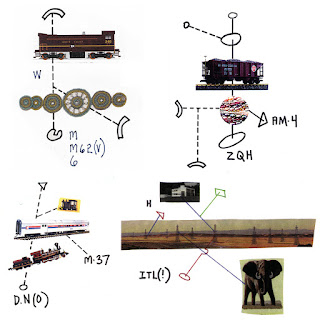 Anthony Braxton is one of the most innovative composers, musicians, and music theorists. His work has been featured on around 60 albums by other musicians, and his number of compositions is over 700. Belgian guitarist Kobe Van Cauwenberghe (Zwerm, Ictus Ensemble, Nadar Ensemble) recognised the uniqueness of Braxton’s Ghost Trance Music systems and made it a mission to come to a deeper understanding of it and its implications for the interpreter. After his acclaimed solo album (Ghost Trance Solos), Van Cauwenberghe invited a group of musicians to take a collective deep dive into Braxton’s musical wonderland of the Ghost Trance Musics and explore its unique communal aspects. In the summer of 2021, this Ghost Trance Septet recorded four GTM-compositions, covering the entire spectrum of the four different’ species’ of the GTM system. The result is this present double CD, which will be followed by a double vinyl issue later in the year.

Anthony Braxton reacted to the Ghost Trance Septet’s performance at the Rainy Days Festival in Luxemburg in November 2021 with emotion, and this ensemble comes with the full approval of the grandmaster himself

On June 5, Braxton’s Birthday, there will be a 2nd concert at the Singel in Antwerp, followed by a performance by Braxton himself. Other activities are planned, including an expo and lectures – more info here.

With Braxton playing fewer concerts these days, this is a rare opportunity to see the grandmaster perform. Braxton has over 500 compositions to his name and has been a visionary pioneer of music, regularly reinventing himself. During the 1970s, Braxton considered creating streamed (or beamed) live performances alongside 100 orchestras in 4 different cities and wanted to mark the year 2000 by the music for multiple orchestras. The program in the performances will feature his compositions from the ‘Creative Orchestra’ albums, where, in an ‘Ellington meets Stockhuasen’ manner, Braxton blends big band with contemporary classical ensemble. There will also be some pieces from the more recent ‘Ghost Trance Music,’ which balances music that is both noted and allows for improvisation. Braxton will perform himself with his new Saxophone Quartet, featuring James Fei ( Roscoe Mitchell, Alvin Lucier), Chris Jonas ( Cecil Taylor, William Parker, Del Sol String Quartet), Ingrid Laubrock ( F-IRE Collective, Siouxsie and The Banshees, Polar Bear) and Andre Vida ( Brandon Evans, Sonny Simmons)

The opening track, ‘Composition 255,’ is a mesmerizing stream of music that begins with the ensemble delivering a punctuated stream of chords in union before, gradually, the percussion first; Then the other instruments begin to shear off from the central theme, creating diverse and intricate side roads of improvised sounds. Follow any of these, and you end up eventually at a crossroads where the ensemble comes together, crosses, and then veers away on different pathways. Eerie vocalisation, underpinned by piano, then brass blats and percussive rhythms thundered out underneath. The subtle blueseyness of the central section of the number with the unsettling bass clarinet just audible beneath the intricate top lines reflects jazz roots, while the explosive, dissonant guitar reminds the listener that this is improvised jazz music in essence. The trans element comes from the palpitation of the rhythms and the endless stream of musical consciousness, which creates a link between the musicians, balancing the directed with the free. The piano rises to the fore playing chordal sequences, over which the rest add their responses – again, that link between the set and the unsettling—an incredibly diverse and creative opening sequence of music.

The following track,’Composition 358,’ opens with the ensemble playing separate yet connected lines, each different yet creating a link to the rest, before snatches of melody rise like a nest of entwined cobras, entwining around the centrality of the number while maintaining their individuality. The glissandos, the responses, the interaction, the brief solos, the quiet moments, and the explosive end section before the fading all work to create another mesmeric number.

The next track, ‘Composition 193,’ continues the theme of collective creativity, the ensemble demonstrating how aggregation can be coupled with fractions of dissonance and subtle connectivity.

After the three-minute mark, the lines set by the piano are reflected and developed by the ensemble with the percussion adding rhythmic patterns that both fill space and create interesting modulations of the tempo. A violin rises in solo before playing spiccato, reflecting the percussive patterns. The bass weaves complex lines underneath. The ensemble then works together to create many hues, painting a colorful ribbon of sound that the listener can follow, leading to a tricky, intricate rhythmic middle section into which they are immersed. The sound curve becomes more complex before it simplifies, allowing individual instruments to be heard. The finish feels orchestral and fulsome.

The final track, ‘Composition 264,’ brings more of the same – a seemingly bottomless pool of sounds, from which individual instruments rise to the surface before diving back to the depths of sound created by the ensemble. This music exemplifies the ensemble style of blended notated and improvised sound and is a delight to both those with an ear for classical and those preferring a freer form of playing.

Braxton proves that comparisons to other composers are pointless, and Braxton is a rare thing nowadays – a composer whose work is unique. The recording feels like an immersion; the music washes over the listener in waves, cleansing and pure. It is a stream of consciousness that emanates from the musicians, serving as a guide between that which is known and the unknown. Clear guidance to form is tempered beautifully with an allowance for freedom that this kind of music gives. There is a sense of connection to the past, a sense of being very much in the present and with the future. Listening to this music is an experience, not an act, and Braxton creates a sense of endless potential.