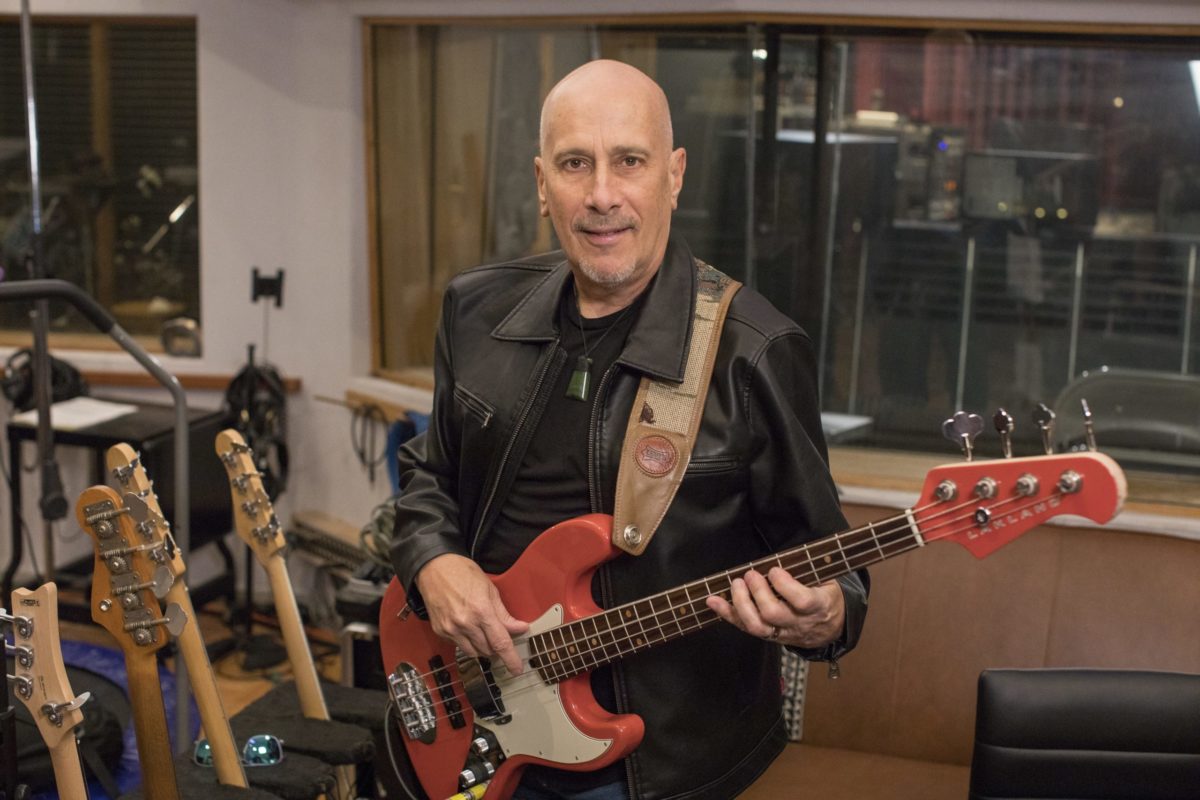 Blues and roots icon Bonnie Raitt recently released her 21st studio album, entitled Just Like That… Comprised of a mix of original songs and covers, the music is just as powerful and pensive as she has ever made.

The album features longtime bassist and session legend James “Hutch” Hutchinson. If you know Hutch, you know you’re in for tasty tones and a perfect pocket.

We caught up with him between the legs of Raitt’s extensive tour schedule and were lucky to hear about the album’s recording process, his favorite DI for recording, and playing with authenticity.

Just Like That… is available now on CD, vinyl, and as a digital download (iTunes and Amazon MP3).

The new album sounds amazing. Did you go into the studio, or did you do it all remotely?

No, we recorded it in Marin County last May and June. We went up there to do some rehearsing for the record and work out arrangements with Bonnie. Then we went ahead and cut the record up there, too. Ryan Freeland, who engineered it, came in and brought a bunch of gear from LA. We cut it in a couple of weeks.

Did it feel much different than previous records?

Sort of. Not everybody had been as active as I had during the pandemic. I think everybody stayed musical, but I don’t think everybody was playing all the time. So they were really ready to get in there and lay some stuff down, so to speak.

When we started rehearsing, it was all in January, February, and March of 2020 until the pandemic broke out. We were in the process of rehearsing and doing some warmup dates and getting ready to record in 2020.

Bonnie had most of the songs, at least the ones that other people wrote. I think she wrote a few and finished them during the pandemic, but for the most part, it was really a continuation of what we started. It was like we started it and took a two-year break.

It was fun. As I said, we did it in the Bay Area. I usually have more bases with me, but I really only had a few things up there. I pretty much had what I take on the road.

I brought my Lake Placid Blue ’63 L-Series P Bass that I’ve used on every record for 35 years. I’ve used that with Joe Cocker and Al Green… I’ve used that on a zillion records over the years. That’s what I used on “Made Up Mind”. I used one of Carey Nordstrand’s Acinonyx basses on the title tune and a few other songs. Those little basses are great.

Lakland made me a short-scale bass, too. It’s funny that I used a lot of short-scale on the record. I’m using the Lakland on the road.

For an amp, I had my [Ampeg] B-15 there, then I brought a couple of DI’s up there that I like. One is an Ampeg tube DI, which is something I’ve always liked. I think I ended up using that more so than anything else.

It’s one of those big ones. They made them for about six months. I did an Ampeg SVT Time [livestream] a couple of weeks ago and we were talking about that. Why do these great pieces of gear have a limited lifespan? Because now those things, if you can find one, it’s like 1,800 bucks or something because they’re so rare and they’re such great DI’s. Ampeg’s talking about making one again. I love that thing and I use it a lot.

I also brought an Aguilar tube DI and might have used that a little bit. Then we were miking the amp, too.

Are you switching between DI’s much for different songs?

I have DI’s I like, but I always bring a backup. And then sometimes an engineer will like one DI better than another that may not be my choice, but you know, he has input as well.

But I really liked those Ampeg tube DI’s and I use that just on just about everything. Although right now I have one of those Reddi DI’s out on the road and a couple of other things, but that’s really pretty much for live stuff.

It’s funny… When they came out in the nineties, Ampeg gave me like four of them. They said, “Well, you work in a lot of different studios. Why don’t you sort of hand these out?”

I think they gave me five, and I kept just two, not knowing that they were going to discontinue them, of course. In the next year, they discontinued them, so I should have kept three because now you just can’t find them. I had one in a gig bag in my truck and somebody broke into the truck and stole the bag. So therefore it left me with one in the end.

I was at a friend of mine’s studio recently and I used a rackmount Messenger preamp/DI that he has, which is pretty great sounding. He said, “Hey, you want to try your Ampeg DI?” I said, “What Ampeg DI?” and he said, “Oh, you left one over here a really long time ago. I call it your DI.” So I guess if I wanted to pull rank, I could say I’ve got another one. I work in that studio lot and I forgot I even brought one over there. So he said, “Well, if you ever need that it’s yours.”

Your playing on the record is outstanding. I wanted to ask about a few songs. “Living for the Ones” has some nice sustained notes up on the neck that actually reminded me of The Who.

George [Marinelli], our long-time guitar player, wrote that. He’s a very Stones type of guy and he likes The Who. That high part that was on his demo and then Bonnie heard it a different way. And she said, “Oh, could you play this instead?” So then I tried playing it like she asked. By the time we finally got it, it was sort of like George’s idea and sort of like Bonnie’s idea, but it wasn’t really either one. It was something that I played that sounds like both of them without being verbatim.

And I think that’s what we do as bassists. We hear songwriters’ demos and [work with them]. Even with “Have a Heart” and some of Bonnie’s early stuff Ricky and I did with her in the eighties, they’re somewhat like the demos and if you were to ask Bonnie, she’d say it was from the demo, but it really isn’t. It’s all how you inflect that line and make it work within the rhythmic content that you have at your disposal and around the vocals. That’s what I really listen to with bass lines: vocals and drums. Everything else is incidental. [laughs] I try to play off the vocals and I try to play off the drums, as far as groove and feel and time. That’s going to alter any bass line that you have presented to you on a demo or a chart or whatever. What gives it personality and makes it stand out is the personality that you put into it.

No matter what we do, we all have little things about who we are that come out in our playing, about where we came from, and who we are. And that’s what one has to realize – you can’t play anything verbatim if you’re going to make it your own. I think that’s really important. In a way, you may think you’re playing it verbatim, but no matter what, [it’s your sound]. It’s like the Beatles when they were doing Little Richard. To them, they probably thought they sounded a lot like Little Richard. To us, they sounded like The Beatles. They were trying to emulate their heroes, but they ended up sounding like themselves. The best music is when you’re coping something, but you’re putting your own personality and your own experiences into what you’re playing, so you’re not going to play it like the demo. So a lot of those ideas came from the demos, but they ended up being nothing like the demos.

Speaking of locking in with the drums, another song I had on the list was “Waitin’ For You To Blow”. The note lengths and attack give a gnarlier feel that sits right in there with the drums.

That’s interesting because that’s a song that Bonnie had written on keys and had just a keyboard demo so there wasn’t a band demo. She heard it as kind of like West Coast jazz of the fifties, as in the Adderly brothers meet Eddie Harris type of vibe. Or a Les McCann thing.

She felt it in that way, and it ended up being a little more funk. There wasn’t a rhythm track on the demo. It’s really just her and a drum machine, so Ricky and I spent a lot of time on that arrangement.

Like so many of the things we do, they’re collaborative when it comes to the arrangement. As we play these things live more and more, they develop into the real personality of the song, and the parts really start coming out, in a way. When you’re making a record, people love them, but we live with those songs and we perform them live and they start growing.

That’s what is happening with that song, especially live because it leaves a lot of room for improvisation. I’m glad you noticed that you brought it up cause she’s pretty proud of that tune, and I think the band played it really well.

I had the feeling someone was working hard on the arrangement because the way it drops into the shuffle beat is killer.

Yeah, and that was completely Bonnie’s idea to go into the shuffle there. It’s a bit of an homage to one of those early 70’s Sly Stone records, like “Hot Fun in the Summertime” or all of those things. He used a lot of those shuffle beats when Larry Graham was playing bass and even later on, but he incorporated it into a funk thing and that’s what happens there. It’s cool and that’s become more prominent live when we do it. I think the first chorus is also a bit of a shuffle, but we don’t fully shuffle it. Anyway, it’s an interesting tune and we worked quite a bit on the arrangement, so I’m glad you brought it up.

I really loved your lines on “Here Comes Love” because they’re so syrupy.

I played and worked in New Orleans. That’s where I really cut my teeth, so that’s a very familiar groove to me. That’s also that same really old ’63 P Bass. It has a sort of George Porter honk to it, which I’m partial to. John Cleary is playing keyboards. Mike Finnegan’s also on it. That track was cut earlier on. It was one of those things that she wanted to record and hold onto for a minute. So I think that track was cut about four years prior to us cutting this record.

I love the way that you opened up and followed with the keys during his solo.

I think that was Cleary, so we do that a lot. New Orleans music is so conversational and that’s really what it’s about. You’re talking with somebody – you’re having a conversation with the music. Which is what you just brought up, you know, something, somebody says something to you you’re answering back, you know, and the best way you can.

Bonnie Raitt is currently on tour in support of Just Like That… Be sure to catch Hutch on the road at a stop near you!