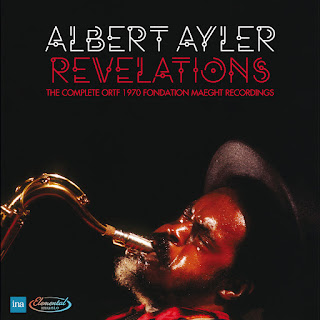 What can any of us add to the legacy of Albert Ayler? What can be said that hasn’t been said better by his own horn and vocals? In 2004, on the Holy Ghost box, listeners finally heard Ayler’s final performance, a short set from July 28, 1970, with his last quintet, Mary Maria Parks on soprano sax and vocals, Call Cobbs on piano, Steve Tintweiss on bass, and Allen Blairmen on drums. The audio on that set is dull and a bit tinny, with Ayler’s high notes getting lost in the mix. It’s crucial for giving us the last possible recording of Ayler, but it doesn’t do enough to complete the canon. To get there, we needed something a bit bigger in scope that captures the previous days’ recordings in full.

Ayler’s July 25 and July 27 Fondation Maeght performances previously appeared on Shandar and ESP-Disk’ as Nuits De La Fondation Maeght 1970 and
Live On the Riviera, abbreviated releases with potentially dubious paths to production. But here comes Revelations: The Complete ORTF 1970 Fondation Maeght Recordings. One of the most fascinating discoveries here is that there was something to be discovered: online sessionographies at ayler.co.uk and jazzdisco.org list only what was previously released, leaving no hint that each night held a full two hours of music and that the sets were not only abridged but were, in the case of Shandar’s sets, disastrously out of order.

The previous summer, Ayler recorded his final studio sessions with Bobby Few on piano and Muhammad Ali on drums, leaving the door metaphysically open for Frank Wright on his way out—as heard on a number of Wright’s albums, Few, Ali, and longtime Ayler -cohort Alan Silva play with the same gorgeous fearlessness that Ayler pioneered. By mid-1970, however, Ayler reunited with some key players, including Tintweiss, who performed with him on and off for half a dozen years and already established himself as a clever collaborator, able to lift the melodies to abstract heights, then ground the open improvisation with furious, driving lines. Likewise, Cobbs had an especially astute understanding of Ayler’s vision, both literally and intuitively—Cobbs helped direct his bands and played with wild abandon, something like Ayler’s sax fed through a pianist’s fingers.

For July 25, the group was caught out with Cobbs getting delayed by customs officials. In true Ayler spirit, however, they took the stage as a screaming quartet. Ayler plays a yearning, pleading solo to lead off “Music Is the Healing Force of the Universe.” Full of anguish, perhaps thinking of his brother at the time, he leans back to let Mary Maria sing the opening verse, then takes off to an astonishingly high register. The sound is pure Ayler, cutting a path straight to the sky. Tintweiss is fantastic, pivoting from arco to walking lines, and the mix brings in so much of the low end, it sounds as fresh as a new recording. “Ghosts” has long been the highlight of the Riviera set, but maybe that’s only because we didn’t have the hour of material that followed, much of it improvised. “Love Cry” stretches way out, contrasting the recorded ensemble’s Cherry-esque vibe with a looser, headier performance.

Much of Revelations pulls from the 1969 Music Is the Healing Force of the Universe and The Last Album sessions. The setlists give the impression of an artist seeking to meld his earlier and later compositions under an unified vision. Arguably, the leaner lineup grants Ayler more freedom to explore and experiment with songs like “Desert Blood,” “A Man Is Like a Tree,” and “Island Harvest.” In addition, there are a number of collective improvisations, here titled “Revelations 1–6.” These alone, largely unheard, make up about an hour of the set’s previously unreleased material (“Revelation 1” appears on Live on the Riviera as the first part of “Oh! Love of Life” but is separated here to clarify how Ayler was directing his groups’ improvisations, as opposed to their organized, composed songs). A good deal of searching and trying to take place, the improvisations aren’t always quite at the level one might expect, but there is something interesting at each turn.

On the July 27 opener, a relatively brief “Truth Is Marching In,” you hear a band with incredible control and confidence. Cobbs had just arrived after a two-day delay—the band had pulled off the unexpected but delirious quartet set on July 25. It’s interesting to hear them in this context now, knowing Blairman would soon record with Mal Waldron, as he and Cobbs are Generally regarded as a fascinating study in contrast—Cobbs reportedly did not consider the rhythm section a well-meshed group. In truth, the abridged recordings more or less bear this out, the sound is not round enough, the group not quite loose in the way Ayler and Cobbs had managed most of their prior sessions. And yet, to hear the complete two hours, the story flips fast. Blairman’s cymbal-heavy playing shines alongside Cobbs, especially on the lengthy “Holy Family,” which gets an airy, rich upgrade and eases into “Revelations 5,” a 20-minute improvisation with Ayler teasing several melodic lines throughout, playing variations upon variations in his somewhat cubist mode. Where the previous night sounded almost distressed at times, the second night is brash and thrilling. On the 20-minute “Holy Holy,” Mary Maria sounds more assured on soprano, perhaps buttressed by the full rhythm section. (Having collaborated with Cobbs on Ayler’s Impulse albums, she may have felt slightly more comfortable with him on stage; we can only guess, of course, but it seems possible, given what we know about their work together on previous sessions.) Either way , by this point in the set, nothing seems to be holding this quintet back: the “Spirits Rejoice” call is responded to with Blairman’s snare, but the group quickly drops into open improvisation mode. Serving as a tribute to the absent brother, this is one of the mellower versions of Donald Ayler’s composition. The applause is tremendous.

As indicated above, this is one area where the running order is different from Nuits De La Fondation Maeght—”Spirits” follows “Spirits Rejoice,” which makes some sense out of Cobbs echoing the latter’s theme on piano. “Thank God For Women,” then leads into the finale: “Spiritual Reunion” and “Music Is the Healing Force of the Universe.” Compared with the previous set’s opening performance, the closer leaves everything on the floor, and then some. More raucous applause and rousing cheers at Ayler’s opening notes spiritually ground the quintet, as Cobbs toys with the chords underneath Mary Maria’s initially restrained vocals. She extends the notes a bit more here, leaning into the song. Although the full quintet plays, even in remastered form, it has the feel of a vocal-saxophone-piano trio. Mary Maria wraps the event with a brief message for the crowd, “We love you very much.” In four months, Ayler would be found dead in the East River. Cobbs would be killed during a hit and run the following year. The torch has been picked up and passed along by countless others, but Revelations reminds us just how bright Ayler’s flame burned, hot and beautiful, wild and unrestrained, and brilliant in every way.

Note: There is reportedly film of the performances, only about two minutes of which have circulated online. If anybody knows more about this, we’d love to hear about it.

Available on CD and digital via Bandcamp